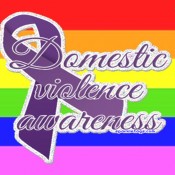 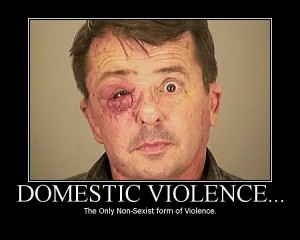 Domestic violence is prevalent, even in gay relationships.

Domestic Violence – methods by which a person seek to control the thoughts and behaviors of another person.

Janie had been with Angela for five years.  Angela  daily takes care of her ill sister who has serious Type I Diabetes.  Yesterday, her sister became very ill and Angela ended-up staying much longer than usual. When she got home Janie began slinging pots and throwing things in the kitchen.  She became so angry until she almost caused a fire in the house. Janie finally confronted Angela and began calling her a slut, and other unmentionables.  She was sure that Angela had been out with another women.  Angela tried to talk but she threatened to hit her in the face. Angela went to bed crying because she just can’t take it anymore. (True Story)

Physical Abuse:
Dan and John have been together for eight years. John never really talks in public and always wears long sleeve shirts. Wednesday, he was retained in a long meeting at the office. It is his responsibility, per Dan,  to cook on weekdays.  Dan states that he always takes him out on Friday and Sunday; they usually just have potluck on Saturday.  Dan waited and waited on John. Once John realized what time it was,  he panicked. John confided in his friend Sally that he was  NOW afraid to go home.  She asked him why and he stated. ” I am sure that Dan will beat me with his belt when I get home  because his dinner was not ready this evening.”    Dan did just what John said.  He made him lay across the bed and beat him with a belt for fifteen minutes. (True Story)
Sexual Abuse:
Cindy has been dating Rochelle for about  six months.  Cindy is a sex maniac. Rochelle has been experiencing some female problems and decided to go in and see her gynecologist.  Her diagnosis was “Trauma from the Vibrator.” She shared this information with Cindy. Cindy became a little hot and began to argue with Rochelle and accused her of being a liar.  Rochelle tried to share with her the paperwork and her prescriptions. Cindy said that she did not want to see that (blank) and told Rochelle that she was not going to be with a person who does not like to have sex. Rochelle took her medications and went to bed early.  Cindy came to bed later, apologized and ask Rochelle if they could have make-up sex. Rochelle was in a lot of pain but she reluctantly consented and just cried throughout the entire encounter. Cindy continued thrusting until she got an orgasm. (True Story)
Economic  Abuse:
James and Jeremy have been lovers since college. James manages a large law firm in D.C. and Jeremy works at the Pentagon. Jeremy has always had problems maintaining a balanced checkbook so he has been, for the past five years, giving James his check and in-turn his lover pays the bills and just  gives him a weekly allowance. The allowance is for gas, lunch and personal items. Last week, Jeremy received a text message from a co-worker who has an attraction to him.  Jeremy does not know how the guy got his cell phone number and was petrified when James found out.  After James read the text, he quietly went to the bedroom and locked Jeremy out. James is very passive-aggressive and did not speak to Jeremy for a week.  He also changed all passwords to the bank cards and repeatedly “forgot” to leave Jeremy money for lunch and gas.  Jeremy took the bus and did not eat lunch for a week. (True Story)
*All of the above examples are true stories but the names and places have been changed to protect anonymity.
Are you in an abusive relationship? Will you spend another sad Valentine’s Day this year? Is your lover an alcoholic? Does your lover realize that he/she is abusive. Do you go to work, school or work ashamed?
If you are in need for help, please reach out by calling the domestic violence hotline 1-800-799-SAFE. (7233)